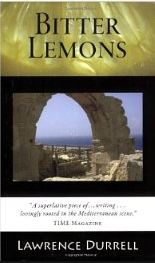 I chose Lawrence Durrell for 2 reasons:

And he does, but unexpectedly, he is also wearing blinders when it comes to Cyprus remaining a British possession. (As it was in the early 1950’s when the book was written.) At one point he says, “When one has an Empire, one can’t just start giving pieces of it away.” Larry, Larry, Larry. As an American, I beg to differ.

The people of Cyprus aren’t British. Therefore, they shouldn’t be ruled by the UK. It’s that simple. And of course, it went that way anyway. Unfortunately, the struggle for autonomy gave rise to violence and hate crimes, and Britain’s lack of foresight had a lot to do with that. You can see it start to happen in the book.

Bitter Lemons is our book group pick. I couldn’t wait and went ahead and read it: The book starts on the ferry from Venice to Cyprus. Larry encounters an Italian, who tells him about the island he’s about to make his home for the next 4-5 years.

This is just one example of the charm I have come to expect from the Durrells. I thoroughly enjoyed Larry’s descriptions of the people and the events, although he does have a tendency to wax poetic and slip into purple prose when describing sunsets and beaches. And of course, “one” doesn’t use the term “one” in writing anymore. It sounds pompous, but then Gerry always portrayed his brother–lovingly– as a bit puffed up. 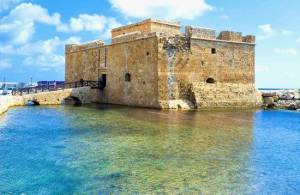 Never mind, we get to hear about the Tree of Idleness, a drunk Greek neighbor who throws his son-in-law’s motorcycle up into a tree, and the greatest rogue of a realtor on the island — a Turk. A bonus for me was getting to hear little snippets about “Mother” Durrell and once, Larry’s brother came to stay. Although he doesn’t say whether it was John or Gerry, I knew it was Gerry because he arrived with crates of animals in tow. It’s like having a cameo appearance from your favorite actors.

Larry lives with a Greek teacher with a passion for wildflowers, his friend Panos. Unfortunately, Panos is killed by a terrorist toward the end of the book for “fraternizing” with “the enemy.” That’s when Larry realizes that his presence is endangering his friends, and although they urge him to stay, he knows he has to leave for their sakes. 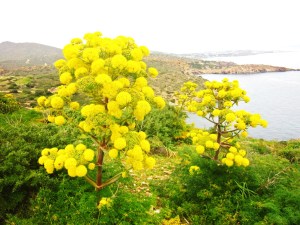 It was a bitter lemon indeed.

An excellent read, although you may want to skip the bits where he goes into excruciating detail about his government job trying to convince the Greeks that they don’t want Enosis–Union–with Greece. I’m sure it seemed very important at the time. But now that Cypriot independence is 60 years old, the minutiae seems…trivial.

Nonetheless, the writing is superb and the characters are wonderfully entertaining. Not least of all the character that is Lawrence Durrell.