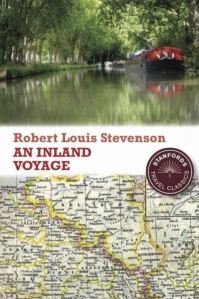 As a veteran of many trips by bicycle and canoe (kayak to you Americans), I enjoyed this lovely account of two young men paddling from Belgium to France.

Although my copy bears no publication date (and no page numbers) RLS, known as “Arethusa” after his canoe, lived from 1850-1894. I’m guessing the trip took place around 1870. It strikes me as odd that, despite the relatively little passage of time from then until now (compared to the billion-year sweep of Earth history) – that in order to really enjoy this book you have to read it with one hand on a dictionary and the other on a historical reference guide.

*Arethusa, btw, turns out to be a water nymph in Greek mythology.

RLS made the Inland Voyage with his friend Sir Walter Simpson (referred to as “The Cigarette” after his canoe). They come upon a parade in Landrecies (northern France) and RLS says of the drummers: “Generally a man is never more uselessly employed than when he is at this trick of bastinadoing asses’ hide…” That turns out to be bastinado-ing, from the Spanish. It means beating or whipping – when applied to people, just on the soles of the feet. Hm.

Many historical references passed over my head, dropping excremental curiosities upon me. Who was buried in the church at Landrecies (left), refered to only as “Marshal Clarke”? The answer turned out to be Napoleon’s Minister of War (1765-1818). RLS would have been born just one or two generations after the Napoleonic Wars and may have had grandparents or other relatives who fought in them. Just as I had a grandfather who fought in World War II.

But a great writer is a great writer, no matter what the century: Here he is on the French forest of Mormal, having just left Belgium:

“I wish our way had always lain among woods. Trees are the most civil society. An old oak that has been growing where he stands since before the Reformation, taller than many spires, more stately than the greater part of mountains, and yet a living thing, liable to sickness and death like you and me, is that not in itself, a speaking lesson in history?”

(Speaking of history, every time I Googled these place names, some World War I battle would come up. The impassible Mormal Forest gave the English and the Germans a hard time circa 1914. A shiver and a shudder lies upon these places, all of them. A foreshadowing of even more history than RLS could imagine…)

“Every barge boasted its mongrel cur as watch-dog: Each one barked furiously at the canoes, running alongside until he had got to the end of his own ship, and so passing on the word to the dog aboard the next.” Dogs, at least have not changed since 1870!

The book is also funny in places. It isn’t funny all over, like Jerome K. Jerome’s Three Men in a Boat (pub. 1889), although the struggles of “Arethusa” and his friend “The Cigarette” are well-known to every canoeist and kayaker. The men struggle through inclement weather that reminds RLS of the Scottish Highlands; landladies at inns take them for peddlers due to their scruffiness; they have trouble using their camp stove to cook with; they quarrel and fall out over who is doing the bulk of the work; the locks are annoying and portaging is a pain.

In a hotel in Boom, Belgium, the travelers encounter an English maid who has been out of England long enough to pick up “all sorts of funny foreign idioms, and all sorts of curious foreign ways.”

Neither RLS nor The Cigarette enjoy Belgian cuisine. This is kind of funny coming from a Scot and an Englishman: “The food, as usual in Belgium, was of a nondescript occasional character, indeed I have never been able to detect anything in the nature of a meal among this pleasing people; they seem to peck and trifle with viands all day long in an amateur spirit: tentatively French, truly German, and somehow falling between the two.”

At one inn, a peddler’s child lets off “Waterloo Crackers all over the floor” – and RLS wonders what they call them in France: Austerlitz crackers? He also mentions a Frenchman who came to England via Waterloo Station and under Waterloo Bridge and was so offended he went straight home again.

(Rumor has it that our Anglo “French Toast” is called “Golden Toast” or “Lost Bread” in France. The latter is because using stale bread for cooking is a way of reclaiming the food.)

And the Battle of Austerlitz? Turns out to be Napoleon’s greatest victory: He crushed the Russo-Austrian army after 9 hours of fighting outside Brno in Slovakia (modern Czech Republic). In my 20s I was thrilled to pass Brno on a train from Hungary to Austria: It is the birthplace of writer Milan Kundera.

An absolutely delightful classic, less well-known than it should be. In my opinion, of more literary value than Anna Karenina or Catcher in the Rye!

* I found a blog on the Willebroek Canal (built in 1561). It cites An Inland Voyage and says it took place in 1878. RLS would have been 28 years old and still single.

** Although it is not mentioned in An Inland Voyage, when Arethusa and The Cigarette finish up in Grez, France in September,  something unexpected happens. RLS meets Fanny Van de Grift Osbourne, the love of his life.

He is 28; she is 35. Fanny is an American who sailed to Belgium after the Civil War to live in an artists’ colony in Gretz.

After this I plan to read Under a Wide and Starry Sky, a fictionalized version of their love story. Thanks, Mom!

*** As always in this blog, the books end up getting connected by coincidence, or fate.

He and Fanny are both buried there, and there is a museum dedicated to him and his writing.