Courtesy of a special order from Auntie’s Bookstore

The Land of the Blue Mountains is Montenegro, but not. It is a genre that became popular after the wild success of barrister Anthony Hope’s The Prisoner of Zenda.  The genre is named after Hope’s fictional Balkan kingdom of Ruritania.

Montenegro is referred to a few times in the beginning of the novel and flat-out named at the end. (A non-fiction work called Land of the Black Mountain: The Adventures of Two Englishmen in Montenegro was published in the early 1920s.)

In this Bildungs-Roman, or court-romance, the mountaineers are fierce, proud, solitary, self-reliant, and wave their “handjars” about all over the place. A handjar is a Turkish or Persian dagger–although the mountaineers have fought the Turks for over 1,000 years to maintain their independence. They’re a bit backward when it comes to rights for women. Their culture is old, their nation is new.

I was curious to see what a cool Englishman like Abraham Stoker would make of the passionate Balkans; what prejudices might be revealed unknowingly, and how his writing would hold up in a Gothic romance beyond Dracula.

We are introduced to the hero, Rupert (of course, he has to be called this after Rupert of Hentzau) through his peevish cousin, Ernest Melton. Melton describes Rupert disdainfully as a poor relation, who loves and is loyal to his foster-mother, former governess and Scotswoman old Janet MacKelpie. Ernest refers to her rudely as “the MacSkelpie”.

It is easy to see, however, that Ernest is an unreliable narrator as well as a thoroughly despicable young man. So the reader cheers when Uncle Roger leaves the bulk of his fortune to Rupert instead, only stipulating that our hero spend time at his estate in the Land of the Blue Mountains.

While there, Rupert encounters the mysterious Lady of the Shroud and immediately falls in love (having exchanged virtually no conversation with her–her beauty is enough. Eye-rolls galore from this modern reader.)

As in any good Ruritanian novel, Rupert and the Blue Mountaineers seek to restore the government of the Voivode Peter Vissarion and his daughter Teuta after some incursions by the Turks. However, the Land is a chauvinist one. So after Peter declines to rule, saying he would prefer a younger man to do so in order that he can retire to a monastery (!) Rupert himself is chosen over the Princess, despite having been enjoined by his Uncle Roger to keep his British nationality. (She makes a truly stomach-turning speech about the place of women, and how things that have been the same for 1,000 years should never be changed. Yuck.)

I loved how Ernest goes to visit his cousin Rupert at the end of the novel and nearly gets decapitated for bad manners by the hostile Blue Mountaineers. He then takes a turn as a literary correspondent for a paper back home, but gets axed for his reportage, which includes too many self-congratulatory asides and comments on his own liver. 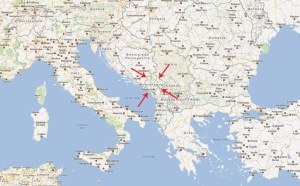 The writing, by today’s standards, was sometimes boring, with long  chunks of unbroken text on pretty dry subjects. The whole novel is epistolary, so you have to find drama in the conversational bits of different letters. A good editor today would have broken it up into bite-sized paragraphs and summarized a lot of legal documents–we don’t have to read the whole thing!

Aunt Janet, who has the Second Sight, also has a Scottish accent that seems intermittent to me. Sometimes she speaks pure Scots, sounding almost as incomprehensible to an American as a native of William Faulkner’s Yoknapatawpha County–and sometimes she sounds just like Rupert, even saying “know” instead of “ken”. (But she always refers to eyes as “een”.) 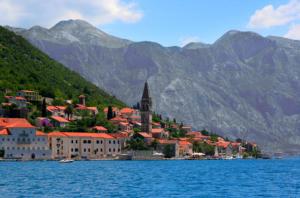 Teuta has a moment of “brilliance” toward the end of the novel when she describes the great virgin forests in the mountains, all hardwoods, and how they can be cut down and sold for the much-desired prosperity for the land. (Bad idea, honey chile. Very bad idea.)

While this novel, set in 1907, doesn’t hold up terribly well over 100 years later, I’m glad I read it. (Though I don’t feel the least need to read Stoker’s other works, like the Lair of the Whyte Worm. I can guess how it goes.) Some of the historical bits now seem quaint, antiquated, curious, and just plain wrong. The nauseating speech of Teuta about Blue Mountain Womanhood–blech. But the character of people hasn’t really changed. The delightfully crabbed cousin, for example. The heroism of Rupert. The machismo of Michael, the Wine Chief, when Cousin Ernest kisses his pretty wife Julia.

Worth a read, especially if you haven’t yet gone beyond Dracula. Three whirring salutes of the handjar.