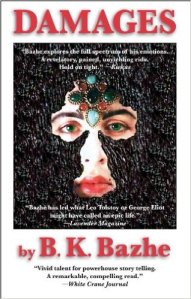 courtesy of a special order from Auntie’s Bookstore

The ways of these Macedonian characters are not our ways. When B.K. Bazhe’s elderly mother gets sick, right after the death of her abusive husband, B.K. takes her to the doctor. But when the doctor tells him it’s cancer, B.K. knows what his mother wants, needs, and expects. He lies to her. The doctor encourages it. (Try that in America and you’d get sued for medical malpractice.)

B.K. tells Mother her pain comes from something trifling and she’ll soon get better. He keeps this up for almost two years–as she becomes bedridden, as she has abdominal surgery and gets a colostomy bag, as the terrible smell of her dying body overwhelms her small house and humiliates and frightens her.

Although he lies to his mother about her condition, ironically, B.K. himself does not like to be lied to. He is angry with his parents for lying to him about his adoption, for example. He also has little sympathy for his birth mother, who was raped at the age of 14. He keeps pressuring her to tell him who his birth father is, and refuses to believe that she doesn’t know the man’s name. He tells his birth mother about his abusive childhood–his father was an important Communist official who was violent at home–and seems to blame her for it. Like many people the world over, he doesn’t care how she has suffered, only how he has.

Not a Great Place to Be Gay

Although not the worst, either. Still, B.K. has had a difficult life being gay in Macedonia, and engages in self-destructive behavior as a young man. It is only when he runs away to Turkey and gets out from under the controlling thumb of his status-conscious parents that he’s able to explore who he really is.

The Macedonian attitudes portrayed in this book toward women’s issues and adoptees, according to this narrator, are shocking, as is their access to modern healthcare (almost nil). One of the reasons that B.K. forgives his adoptive parents for so much, and tends to his dying mother personally, is because he says that Macedonians think adopted kids will never bond to their adoptive parents. B.K. is determined to prove them wrong, taking on all hospice tasks for his mother, including changing her colostomy bag and washing all her nasty things.

It’s a good thing he wants to do this and is able to take time off from his job in America and his lover Fred, because according to him, almost nobody in Macedonia wants to take care of old people, let alone cancer patients. The one nurse he gets is a Bulgarian woman whom he suspects of stealing his mother’s jewelry.

His mother, wanting to avoid conflict, insists that she gave the woman the stuff, even though B.K. knows she didn’t. On a visit from America, B.K. discovers that the nurse doesn’t change the colostomy bag often enough, and the neighbors say she sometimes starves his mother so that she won’t produce any waste. She also yells at the old woman.

This is an easy read, despite several graphic scenes of sexual abuse, rape and violence.

In terms of the country’s history, it is like looking through the small end of a telescope (BK’s life) up at the larger events of the country. In BK’s circles, Marshall Tito is spoken of as a hero who united all the ethnic groups and created something good. His death and the crumbling of Yugoslavia is felt with regret. And, as a staunch former Communist who has seen the rise of Christian nationalism (he despises the rebellious Albanians) and Islamic fundamentalism, BK disparages religion in the strongest terms.