courtesy of a special order from Auntie’s Bookstore

I can’t say enough good things about this novel. But just like the hairdressers at the fictional Khumalo  Hair and Beauty Treatment Salon in the former Rhodesia, I’ll try my best. The novel opens with an ordinary day in the life of Vimbai, the best hairdresser in the salon. She has no idea her life is about to split wide open:

“I knew there was something not quite right about Dumi the very first time I ever laid eyes on him. The problem was, I just couldn’t tell what it was. Thank God for that…” 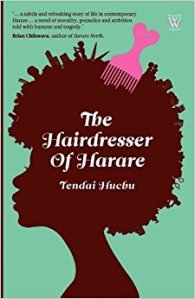 At first, Vimbai is threatened by the new stylist, Dumisani, with his Hollywood hair that makes black women feel white. When the customers that always ask for her start asking for him instead. So when Mrs. Khumalo gives them ALL a raise thanks to Dumi’s negotiations, Vimbai is torn. But it isn’t too long before she also falls under the superhero’s spell. She does not want to like him, but she can’t help herself.

Like Alexander McCall Smith, Tendai Huchu is skilled at telling a small, close-up story that gives you over-the-shoulder glimpses of the bigger picture in an African country struggling to find its way after Independence. In this novel, tensions are high. The government is corrupt. The people struggle to earn money, the black market flourishes, inflation makes money worthless, and racial hatred is strong. Trying to get transportation anywhere is a nightmare.

Mrs. Khumalo’s salon in Harare is high prestige, which means some of their clients are government ministers. One is a woman. A black woman minister, I thought–yay! No, not yay. She’s a bigot who throws a fit when a white woman called Tina comes to the salon to get her hair colored. Tina’s ancestors were Dutch colonizers, but she was born in Zimbabwe and the country is now her home. The minister, however, has taken Tina’s land under the new laws–Tina inherited a farm, and the government took it. The minister owns it personally, though she already had 8 other farms. So Tina’s had to become a scrounger, a seller of beauty supplies and black market sugar and other items.

To everyone’s surprise in the salon, Dumi stands up for Tina, insisting on her right to have her hair done at the salon, just as any other customer. Mrs Khumalo is not so brave. She says if he ever pulls a stunt like that again, she’ll fire him. And the minister summons a bunch of war veterans (thugs) to beat Tina if she doesn’t leave. But Dumi won’t be intimidated, although he does have to get Tina out of there for her own safety.

Vimbai is now starting to fall in love with Dumi, who has moved in with her. Unlike Vimbai’s parents, he doesn’t care that she’s had a daughter out of wedlock. He isn’t like the average man in the street who whistles and catcalls her as she walks by. He’s interested in her opinions and talks to her like a person. He is kind to Vimbai’s daughter Chiwoniso and generous with his things (he’s got a lot of money).

The novel’s surprises, which we learn about toward the end of the book, highlight some serious problems in Zimbabwean society: poverty, cronyism, classism, rape, child sexual abuse, racism, right-wing government extremism, and a legacy of lateral oppression left over from colonialism.

As in any good novel, this protagonist changes over the course of the book, growing emotionally and politically as she becomes closer to Dumi, and I loved it.

The Hairdresser of Harare is a good-hearted, feel-good novel about regular people with some serious problems, tragedy and heartbreak but, as we all hope it will do, it works out well in the end.

A note about the author: He’s a man! Who knew? I certainly didn’t. Readers tend to assume that the author has the same gender as the narrator, and since the narrator of this book is a female…I thought the author was. And of course, in an unfamiliar language you don’t know which names are male and which are female. If his name had been Bob or John or even Lazlo or Zoltan I would have known they were male names. Interesting.

No, but so what. I have LOTS of gay friends. This book was very disturbing for that reason. Read some chilling stats on the state of LGBT people in Africa.