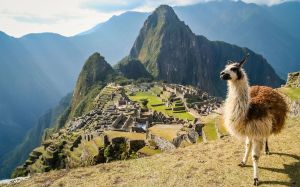 PREFACE: The Nobel Prize in Literature 2010 was awarded to Mario Vargas Llosa “for his cartography of structures of power and his trenchant images of the individual’s resistance, revolt, and defeat”. For a body of work, not for this particular novel. I feel the medal icon atop this book is misleading, most likely on purpose.

OK, let’s tell the story! The protagonist of this novel is a Perunvian Jewish man of Central European ancestry named Saul Zaratas, who was born with a huge strawberry-colored birthmark on his face and calls everyone “pal”. Because of the birthmark, they call him “Mascarita” or The Mask. The narrator is his college roommate, who is trying to find him after a few decades of having lost touch. The novel opens in an art gallery in Florence, where the narrator has gone to try and forget about Peru for awhile. But there, in this gallery, is a series of photographs, one of whom features a group of Native Peruvians known as the Machiguenga tribe, gathered around a storyteller.

Having never read any Vargos Llosa, I decided to try this particular novel because I too am a storyteller.

The importance of stories to the Machiguenga is undeniable. Stories from the basis of their religion, their oral history, their medicine, and their culture. Stories keep alive the atrocities of the “tree-bleeding” time in their recent history, known to the colonizers of Peru as “rubber-tapping” in which they played off the tribes against one another. Slaves were told that if they captured 3 enemies and delivered them to the Viracochas (whites) of the plantation, they themselves could take their families and go back to the jungle. UGH

I found some of the transitions jarring–it wasn’t always clear at first who was speaking–and the Spanish and Machiguenga terms, plus unfamiliar plants and animals that are thrown into the text without so much as an italic needed footnotes–thank goodness for Google. It also would have been nice to have known, as Vargos Llosa obviously does, that the Machiguenga don’t use personal names. For a bit I was quite confused as to why every Machiguenga was called Tasurinchi. Were they all the same person? No. Also, the narrator says that his friend “defended his thesis for his bachelor’s degree in his fifth year” at San Marcos–that isn’t the way it works in the English speaking world, pal, so we need a bit of explanation we don’t get. (Most likely these areas of the book are not Vargos Llosa’s fault but rather bad choices on the parts of the translator and publisher.)

The writing was pretty stellar. I got a little tired of the long-winded stories of the Machiguenga mythology, wanting in my Western reader way to focus more on reality, science, rational thought, and actual history. Still, the search for Mascarita was interesting, his evolution inevitable. Although as a reader, I would have liked a more conclusive ending. Because as is, it kind of reads like, “there was this Gringo/outsider/deformed person who abandoned his white lifestyle to go live with primitive peoples in the interior. The end.”

I love learning names. Names are so important. I am still learning the names of many of the native peoples of what is now the USA. But these names I had never heard before. Although Wikipedia lists around 60 tribes in Peru, some of names that crop up in the book, either as neighbors or traditional enemies of the Machiguenga are:

The names of the South American Indians and places resonated like flute music in my ear as I read. Quillabamba, a city. Kashuri, the moon. Kientibakori, the major evil spirit. But Vargos Llosa doesn’t make the mistake of romanticizing The Men Who Walk, or to my great relief, fetishizing the native women (I find this tendency in male writers to be super icky). Mascarita mentions the problematic customs. He admires the tribes greatly, but he sees traditions in their society that he doesn’t like. And he makes no bones about it. He says he is not an Indigenist, like those of the 1930s, although he thinks the tribes should not be Westernized any further, that they should be left alone, pal.

Early on we are introduced to the Machiguenga idea that The Men Who Walk (and indeed, all humans) should control their emotions and not give way to negative outbursts. “A man throwing a fit can make a river overflow, and a murder makes lightning burn down the village,” Saul explains to his white friend. I immediately connected the dots to the Tibetan Buddhist idea of Tulpas, or beings created from emotional energy. And also to the ancient Greek idea found in Oedipus Rex, that if humans misbehave, that chaos bounces back to us in the form of natural disasters.

I was also intrigued by the idea that you can outstay your welcome in one place in the natural world, and need to walk on so that the sun does not fall from the sky. It makes sense in terms of resource use, and reminds me of the Yellow Leaf People in Thailand, a hill tribe that practices slash-and-burn agriculture like the Machiguenga. When the leaves they used to build their huts turn yellow, they know it is time to walk on.

I liked parts of Gabriel Garcia Marquez’s 100 Years of Solitude in college, but I felt frustrated at the lack of linear storytelling and a rational worldview. I didn’t understand half of what he was alluding to. I’m too much a product of Western rational thought to be happy with this form of a novel; too educated in the North American school system to “get” a lot of the history and culture that might be obvious to South Americans; and I notice most of the others in my book group at Auntie’s seem to be the same. If I spoke Spanish and lived in South America I would probably love magical realism. But, I don’t. Ironically because I read a lot of science fiction/fantasy novels, I am MORE tolerant than most Americans of this form. I haven’t even tried to tackle Jorge Luis Borges.

If I were editing this novel, I’d have chopped it in half, tightened up and condensed the rambling Machiguenga teaching tales and creation myths, and forced the narrative into a plot structure where things happen. I might have also suggested in the end that there are consequences, whether emotional or physical to Mascarita for throwing his lot in with the tribes of the interior, or that there is a showdown or confrontation between the narrator and his old friend. Or that there are stakes in the events for any of the people, anywhere, at any time.