Courtesy of a special order through Auntie’s Bookstore

I have been engrossed in a series with a pet penguin before. In Japan. But never like this. Viktor’s pet Misha came to him when the zoo in Kiev, Ukraine, was unable to afford to feed all its animals following the post-Soviet collapse. They were giving them away to anyone who promised to feed and take care of them. So Viktor got a King Penguin. Misha is his only friend, the only one the socially awkward Viktor can relate to. Like Viktor, Misha often seems depressed.

Viktor longs to get short stories and novels published, but often lacks the motivation to write them. While working for a newspaper, he lands a job writing obelisks–obituaries. Now, in the West, it is common for major newspapers to keep a running file of a few dozen royalty and celebrity obituaries in advance, in case these people die, so they can scoop the competition. (I know this from having worked in newspapers. Queen Elizabeth is one. Angelina Jolie is another.) So Viktor is asked to start an obelisk file on some notables in his country, just in case. 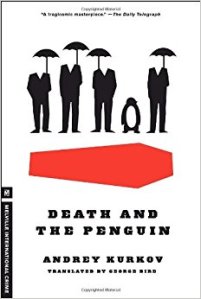 But something sinister starts happening–the people he writes about start dying. Often just after he writes an obelisk. And he isn’t choosing who to write about anymore, he’s being told. When he asks the Chief of the newspaper he works for what is going on, the man tells him he doesn’t want to know. And that when he does know, his usefulness, his job, and even his existence will no longer be needed.

So Viktor goes along to stay alive, churning out hundreds of these things, rationalizing to himself the whole time. Meanwhile, Misha the penguin is dragging him into life and connection with the world. One evening Viktor is visited by a sinister man called Misha Non-Penguin who delivers obelisk requests to him. The stranger’s 4-year-old daughter falls in love with the penguin, and soon Misha Non-Penguin drops Sonja off to stay with Viktor while he lays low somewhere, waiting for the dust to settle.

Having nobody to penguin-sit Misha when Viktor has to go away on assignment, Viktor calls up the military post and gets a random soldier to watch him. Luckily, Sergey Fishbein is a nice guy and makes friends with Viktor. His niece Nina later comes to babysit Sonja and be her nanny.

Even though this is a dryly funny dark comic novel, the characters are very real and you can’t help but root for them. I wouldn’t have enjoyed it as thoroughly as I did had it been bleak or depressing. It wasn’t.

I got the strong feeling that Viktor was a mish-mash of all the people in Ukraine who were living their daily lives, keeping their heads down, just trying to enjoy their lives and maintain a sense of inner peace while all around them corruption on a massive scale was taking place. Corruption in which they themselves were unknowing or knowing players.

Viktor talks quite often about how he feels helpless, he has no choice but to do as he’s told, how the 118+ deaths don’t affect him and his cobbled-together family, how things are not right in the city or in the country as a whole and the times are bad, but that people have gotten used to it and now it is the status quo.

One of the great things about this powerful little novel is that you get a strong social critique exclusively through the frame of the plot. No preachiness here. 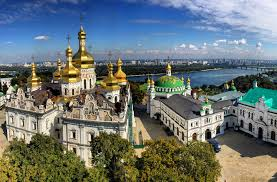 Despite Viktor’s complicity in the murders of the notables–and none of them are blameless–you like him. Despite his poor treatment of Nina, who eventually becomes a girlfriend he neither desires nor loves; despite his lack of love for Sonja, you like him. You like him because he does love his penguin. You like him because he is unexpectedly kind to the old man who used to look after the penguins at the zoo. This old man is just as isolated as Viktor, and when he phones Viktor with stomach pains, Viktor goes around to his flat, rings for an ambulance, and pays the attendants $50 to take the man to a hospital. 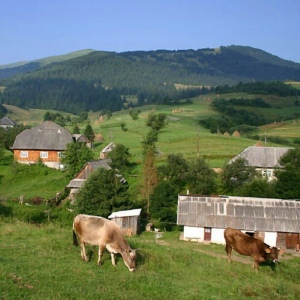 Conditions in the hospital are shocking and the old man is given no medicine even when they discover his stomach cancer. Viktor is outraged. There is no medicine. All the hospital can offer is bed rest.

The end of the book was neat and tied up the expectations I had in the beginning into a delicious present. Apparently there is a sequel called Penguin Lost, which I would be delighted to get my hands on.

Rating: Five bowls of frozen plaice and a bite of banana!

In one scene, Nina scolds Viktor for giving money to a charity collecting for scientists in Antarctica, telling him it’s a scam. “Remember when they were collecting for a children’s hospital because of Chernobyl?”

In another, some pilots tell him they are flying on “May 9, Victory Day as was.”

A little recent history for you!