One of the great pleasures of reading previously-owned books is getting to know the random stranger who likes to read the books you like, and who read the book before you. When this hardback arrived in the mail, it was stamped “Merrywood School for Girls, Bristol”.  Although no highlighting, dog-earing, or jammy fingers marred the pages, there was an old-fashioned library pocket in front. The last time someone checked out the book was 14 January, 2000. Well, I must say a Rainforest Adventure sounds pretty attractive in January in gloomy old England! This was not the school library, though, the book has had a second incarnation as the property of the Avon County Library, and it had cost six pounds, 99 p. I merely mention it because, as a product of the Royal Geographical Society and the BBC, it has certain affectations uniquely British. But more about them later. 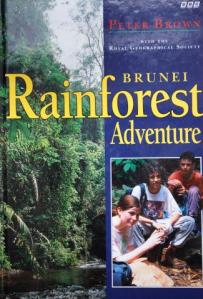 I can’t imagine what the 3 chosen 14-year old Britons must have thought when they were selected from hundreds, maybe thousands, of teen applicants. Did they know how lucky they were? Or did they put it down to talent, as a 14-year-old often must. The boys were a musician and an artist, and the girl was a writer. They would interact with the rainforest under the supervision of scientists, and record their impressions. All expenses would be paid, for two weeks. They would trek through the jungle with a toff called Lord Cranbrook (no first name). Later, there would be a film.

HRH His Royal Highness the Prince of Wales (curiously, no name given here either) was the Patron of the Brunei Rainforest Project the year that they set off on their adventure: 1991. The Batu Apoi Rainforest had just been declared a national park by the government of Brunei, whose people had grown wealthy from oil. They had made the forward-thinking decision not to log all their rainforests to sell timber to other countries, thus this one could and would be studied.

With five or six large pictures on each two-page spread and tons of sidebars and text-boxes and carrot points, this book was designed to suck in the 14-year-old adventurer like quicksand, and as a young Indiana Jones trapped in a 40-ish woman’s body, I could not put it down.

“My mind is a chaos of delight,” wrote the great Victorian naturalist, Charles Darwin, when he first set foot in a tropical rainforest.

I knew just how he felt, looking at:

Scientists are still finding “new” (to us) discoveries in the rainforest. Not to mention new cures for disease. There is no “last frontier”. I find this immensely reassuring.

I enjoyed the paintings and the journal excerpts; it was a little harder to get the experience of the boy who played the saxophone. I’m sure that came across better in the film. He made the point that the jungle is never quiet. And that you could tell the time of day by listening to the particular noises. The book reminded me that “an artist has traditionally been a member of an expedition. Before the days of cameras, artists were there to record discoveries and important moments.” And of course, the art can capture the mood of a place. It was traditionally used sometimes to make the explorer look heroic.

The kids got to work with scientists studying:

I did NOT enjoy the pictures of creepy-crawlies. There was one snake, a reticulated python, that weighed 200 pounds, was 21 feet long, and had a grown-up deer of some kind in its stomach–with antlers. UGH.

Rainforest Action: This is not a book that simply predicts dire consequences for the earth if we lose “the lungs” of our world. I liked the section at the end where they tell you what you can do to save the rainforests. One simple suggestion is to “Become a Brazil Nut.” They say these nuts grow only in tropical rainforests due to a complicated pollination process which involves both insects and bats. They say they are harvested without damaging the forests. By buying Brazil nuts, they say, you are helping local people make a living from the forest.

And so on. Giggle. To sum up, the book gave me that same thrill of excitement and discovery I felt the first time I got a letter from my new German pen-pal back in the 1980s. Hmmm, I believe I was 14 years old then. I think anyone with an ounce of curiosity would love to get their hands on this book, and have an armchair Rainforest Adventure in Brunei, with no insects to bother them; no heat or humidity to keep their socks wet for days on end.

RATING: Five curled millipedes (more attractive than they sound). In fact, I thought they were flower blossoms until later in the book.